Not sure I will get to do more modelling on Project Soane before I head off to Las Vegas for the first time ever, but I certainly intend to carry on for a while after I get back.  It would be nice to have a crack at those parts of the NE & NW extensions that are well documented: Consols Library, Residence Court, Doric Vestibule, Accountants Office & Waiting Room Court.

But last weekend I progressed a bit further with the cellars. 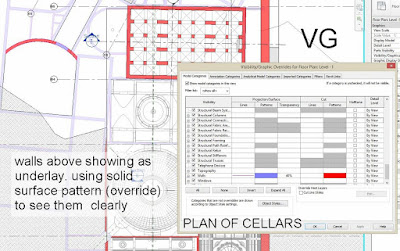 I needed to see an attached the walls above so I set an underlay, and to make them stand out better used a solid fill override.  These walls are not being cut in this view of course so it's applied to the surface pattern.  I was hoping to see this over the top of an attached jpeg but this doesn't work.  Underlays seem to exist "underneath" images. 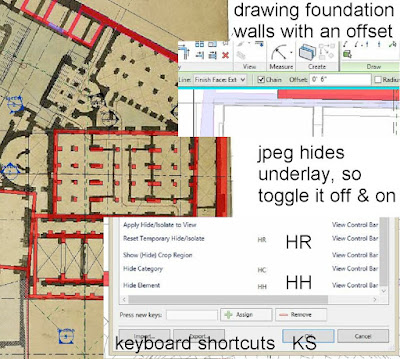 So I resorted to toggling the jpeg on and off with the sunglasses. (temporary hide)  I never remember the keyboard shortcuts for this, but this time I really needed to so I did some quick revision on that.  The keys are pretty close together so that worked well.  Also needed foundations to step out wider than the walls above, but not always centred, so drawing with an offset was useful.  That's something else I don't often do, perhaps I should. 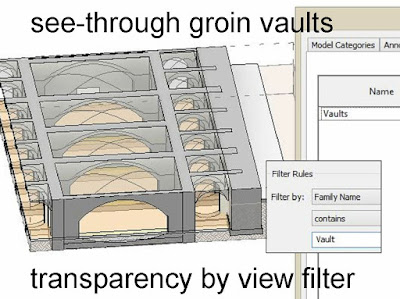 I had a nice improved version of the groin-vault family that I made the previous weekend so filling in the bays was quite fast.  I made a section box view and set the vaults to a level of transparency using a filter based on the family name.  That gave me a nice overview of what was going on down in the dungeons. 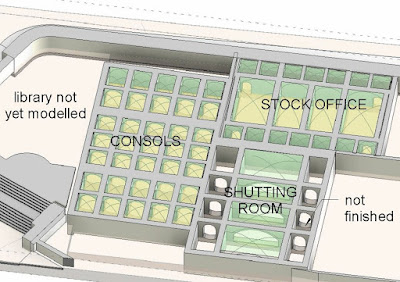 With a bit of trial and error I came up with a combination of colours and transparency levels that showed up well.  Basically the 4 banking halls that pre-existed Soane follow the same foundation plan with slightly differing dimensions, but the Consols Transfer Office which was built from scratch uses a more regular, cellular pattern. 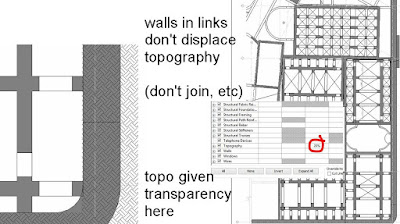 One thing I hadn't thought about too much before is the way that walls inside links interact with topography.  Seems like they don't.  Perhaps I should take those walls out of the links and put them in the base file.  For the moment I just gave the topo some transparency in the view.  The hatch still goes through the walls, but at least you can see them.

So within a couple of hours I had cellars beneath all 5 banking halls and you can see how the brick vaulting works.  Imagine walking through this underground realm two centuries ago: a bit cold and damp I should imagine... time to move upstairs.

To bring this whole zone up to the same level, the rotunda needed glazing.  As usual we have rectangular windows in the lantern, and semi-circular ones at high level in the thick walls.  I made copies of some of my existing windows and adapted those.  I'm just using indicative steel sections at the moment, simple rectangles. 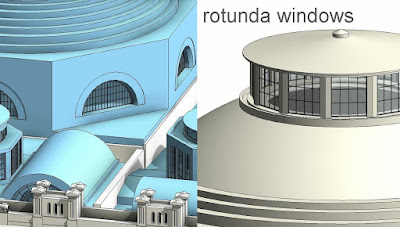 The semi-circular windows have splayed reveals.  There's a drawing that shows this.  I made a profile to use in a void sweep and made a sketch path using the pick mode.  This is subtly different from picking a 3d edge which generated one of those "circular chain of references" errors.  I interpret that as meaning that the void is eating up it's own reference edge.  The sketch method still allows you to reference the existing void geometry, but it selects the whole surface rather than just the edge, so it's not upset when a part of that surface is cut away. 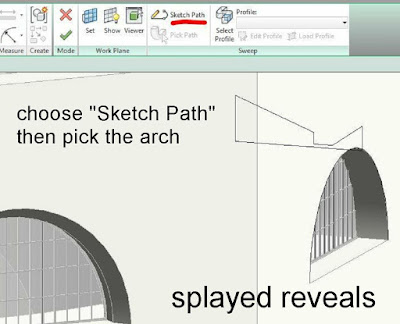 The end result is a shallow splay on the inside and a steeper splay to the outside.  I took the liberty of modifying the profile to create the suggestion of an arched surround on the outside.  The wall was looking a bit blank.

I could have added some sweeps (there is a hint of these on one of the sections) but.  Just wanted the rotunda to match the other halls for LOD when viewed from a distance.  It's quite an interesting roofscape now and quite amazing to reflect that I had absolutely no idea what it was going to look like until I started modelling. 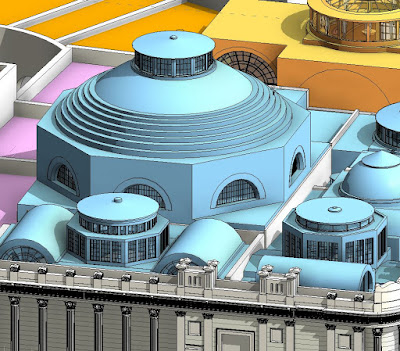 But as luck would have it, I came across a rather grainy aerial photo dating back to before Baker came and trashed all Soane's work.  I'm sure there are various minor modifications showing, done after Soane retired, but it is potentially a very useful image.  If only the resolution was a bit better.  I wonder what the date is?  Remarkable lack of traffic, but quite busy with pedestrians.  I wish I had time to do a massing model of the surrounding buildings.  Put that on the list. 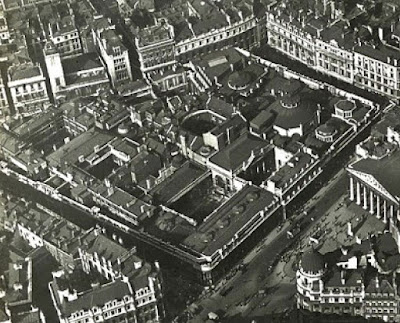 So now I was ready to hit the main target of my weekend (actually only one day because I had a presentation to complete) namely Tivoli Corner, primarily the Attic.  David Mettler was kind enough to model up the acroterian detail rather nicely about 3 weeks ago, so I copied that around.  (strictly speaking there are 2 acroterions and 4 antefixes, but they all use the same family. 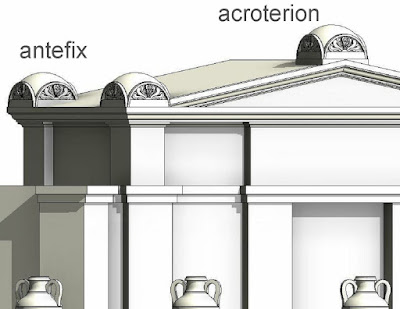 The profiles for the various mouldings are based on guesswork mostly.  Time was limited so I didn't want to spend much time poring over source material.  Take this as a first pass, well second pass really.  Get the attic up to a level where it doesn't look out of place. 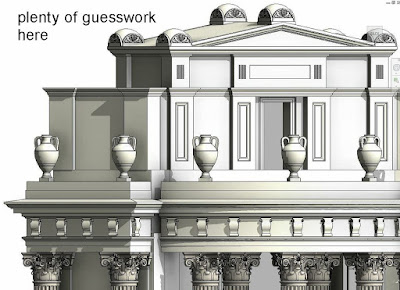 Once again there are functional insights that come along with the exercise.  This is the mother of all sentry boxes linking the battlements along Lothbury with those heading off down Princes Street.  Several openings to allow the guards to look out towards the street, or back inwards to the bank. 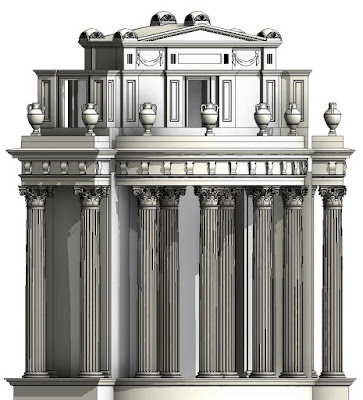 I managed to create a pair of garlands for the attic, (just a simple extrusion) but didn't get around to the one that alternates with the bulls' heads around the freize.  Nevertheless, Tivoli Corner now looks as if it belongs with the two facades that it joins together.  One thing that interests me is that from this perspective view, you can't really tell that the angle is almost 60 degrees.  I guess that justifies Soane's choice of treatment.  Actually, if you study the drawings in the online archive, he went through at least half a dozen different concepts before settling on this one. 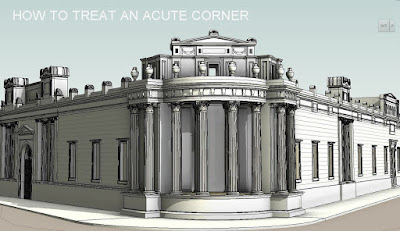 Looking at an old photograph I realised that scrolls were added to the ends of the sentry box.  A late decision perhaps to link Tivoli Corner with the language of the two facades.  That's about the fourth time I've copied that family and adjusted it to suit a new context. 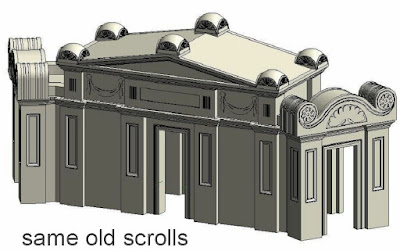 And finally, I copied the door from the VIP entrance and adapted that (very slightly) To sit at the back behind two layers of columns.  This was a false door I think, with a blank wall behind, but at the moment I haven't made that modification to the family. 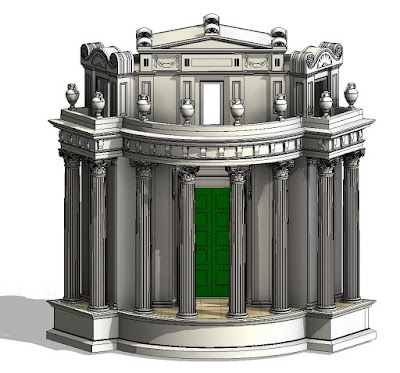 So that's about it.  I'm going to be giving a little talk about Project Soane at an event in Dubai next week, so this coming weekend will be spent reflecting on the process and assembling images rather than more modelling.  Probably a good time to do that. 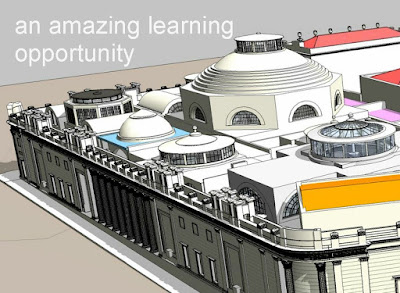 I'm looking forward to meeting up with some of the guys behind Project Soane at AU and discuss the way forward.  From my point of view it's been an incredibly valuable experience.  I've learned so much on many different levels: about John Soane, about classical architecture, about the way the bank works (worked) as a building, about the technology used. 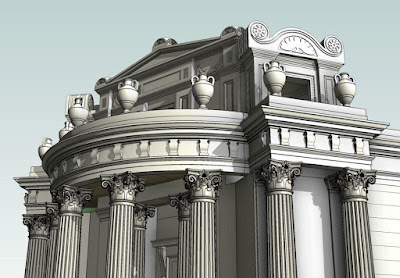 I've already uploaded this work to A360 so you can download the files if you are interested to pick them apart.  Don't be too critical, I've been doing what I can in the time available.  Lots of cheeky workarounds and kludges in there. 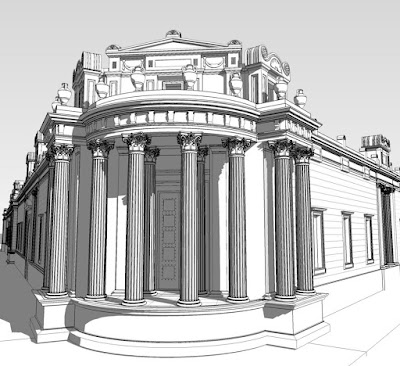