I've really fallen behind with finishing posts.  Here's one I started almost a month ago about work I did on Project Soane a couple of weeks before that.  The target area is the southern side of Lothbury Court.  There is a kind of triumphal gateway leading into a tunnel for the bullion carts to complete their journey to the unloading point next to the Bullion Office.  The original building by Sampson had two courtyards: a public "Entrance Court" and a private "Bullion Court".  As part of the N.E. Extension, Soane remodelled the back wall of this second courtyard, making it curved so that the angles tunnel can pass through at right angles. 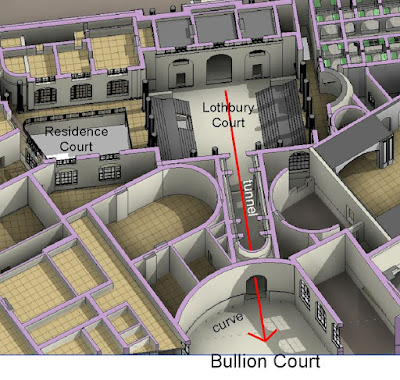 I had previously mocked up the triumphal arch on the Lothbury Court side very roughly.  Time to flesh it out a bit.  I had come across an old photo that helps with this, possible one of Yerbury's record photos from the 1920s.  There are four columns supporting four statues.  Actually Soane went through multiple versions of this design before settling on a solution.  (surprise, surprise) 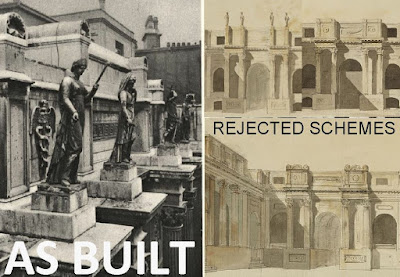 The columns stand away from the wall by a fair distance and each carry their own projecting entablature.  I have a wall sweep on the back wall, but it's not that easy to make wall sweeps wrap around 3 sides of a wall neatly, so I decided to make a family using the same profile. 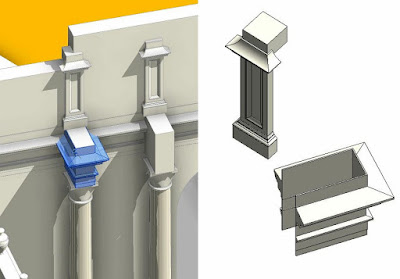 This worked fine and was easily extended to include the pedestal elements that rise up behind the statues.  These have a version of Soanes favourite ornamental feature, not a canopy dome this time, but instead a deep barrel vault.  Once I had inserted these, I realised that the higher section of parapet wall is not spread across all 4 columns as I had it, but confined to the central bay above the arched tunnel. 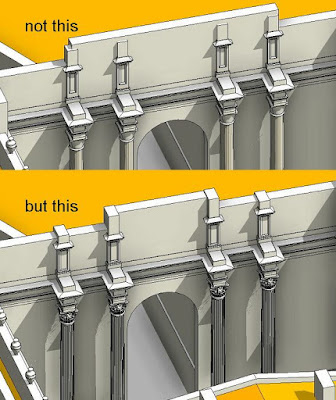 There is a really nice watercolour "rendering" in the archive, a sectionalised elevation with strong shadows and a very effective pink tone for those elements that are viewed in section.  As it happens, this is not the final design. The screen leading to the Residence Court is very different and the parapet elements that I was modelling here also vary from the final version.

By the way, wherever I show one of Soane's old drawings in my blog posts the copyright resides with the Soane Museum and it is a great privilege for us all to have access to these drawings via their website. 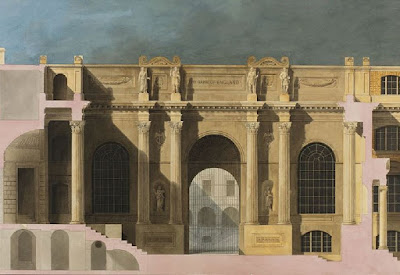 I tried to capture a bit of the same feeling in a Revit section, but it's a pale imitation really. 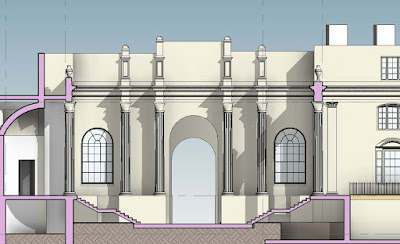 Amongst the archive drawings I noticed one that showed the lantern of the Consols Library.  That was the first reliable piece of information I had come across for this element so I went ahead and modelled it.  Haven't got the parapets right yet in this area though. 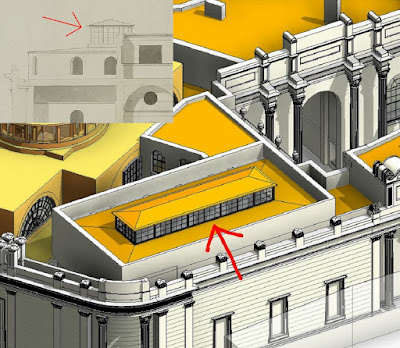 The tunnel, or bullion passage if you prefer, has two guard stations: one at the beginning and one towards the end. They are both similar with doorways on either side framed by pilasters that carry semicircular arches.  They act as a rhythmic punctuation to this barrel vaulted passage that ends in an apse above the final archway into the bullion court. 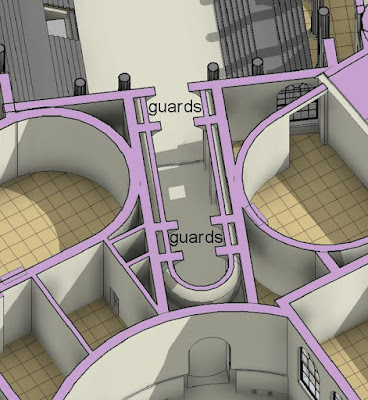 There followed a period of fussing around in the interior: adding in a few missing walls to divide up the smaller rooms, inserting doors (openings to represent doors at present) plus room names and placeholder chimney stacks.  This kind of work gets a bit boring after a while so I spread it out: an hour here and an hour there. 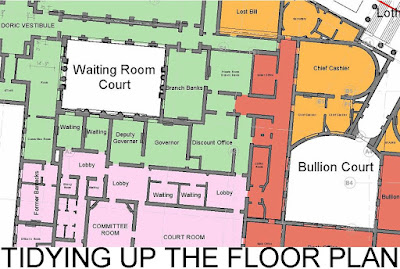 Which brings me to the Chief Cashier, an interesting room that features in one of Yerbury's pics.  There is a dome, possibly with a lantern.  So that takes me back to the pendentive family I developed last year.  I decided to reconfigure the parameters: basically a bit of formula work so that you can enter the size of the square that the dome sits on and the radius parameters are derived from that using a "flatness" factor.  I had a request to share this, so that will happen shortly. 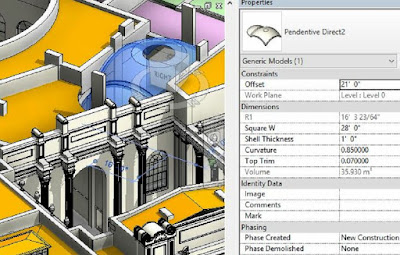 The dome sits directly on the walls on 3 sides, with an apse on the fourth.  The photo seems to be taken from a gallery running along the side opposite the apse, but I don't have any more details on this structure.  There are no plans for the first floor rooms as far as I know, except for the Residence Court.  It looks to me as if the gallery sits on top of the corridor on the left hand side 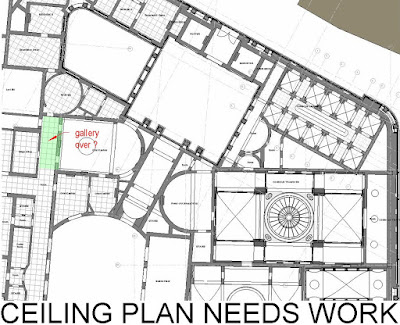 I think that's enough for a post.  I can conclude with a view of the triumphal arch in the context of Lothbury court.  Soane finally got the balance between columns an arches just about right I think.  Tricky to maintain unity of design in a project like this that just "sort of grows" from year to year as the board of directors come up with new requirements, not to mention new pieces of land to incorporate into the scheme. 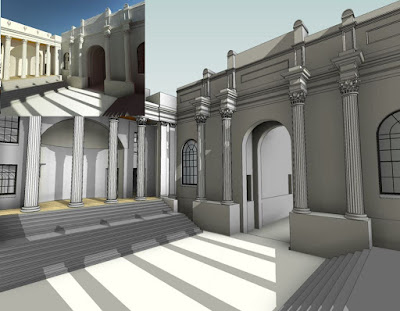 Just one more image.  An overview of the whole model as it stood 3 weeks ago.  The phases of development are colour coded, as they have been since I began this work almost a year ago.  Red is what's left of Sampson's original double courtyard.  Pink is Robert Taylor's rapid expansions to East and West.  The East wing is mostly blue because it was rebuilt by Soane in stages, banking hall by banking hall, within the existing rectangular shells.  We have been looking at part of the orange bit today.  The North East extension by Soane on newly acquired land.  Next post will be moving back into the green area.  The North West extension that involved closing off part of Princes Street and converting it from a dog-leg into a straight line.  We shall be working on the Doric Vestibule which is in the middle of the new portion of Princes Street. 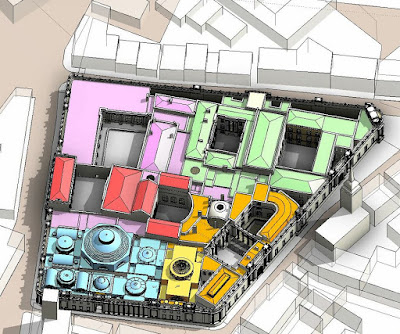