In 2017 I spent 3 days in Zurich on the way back from a conference in Denmark. This was my first time to visit Switzerland. On the third day I took the train to Lucerne which made for interesting comparisons.

I have been struggling this weekend to recover from overwork and decided to embark on a second ‘acrylic on canvas ‘ painting. I bought a second canvas at the local supermarket, and while this is convenient, there are issues. I would like to work at a larger size, and I would be willing to pay 2 or 3 times as much to get something made elsewhere. 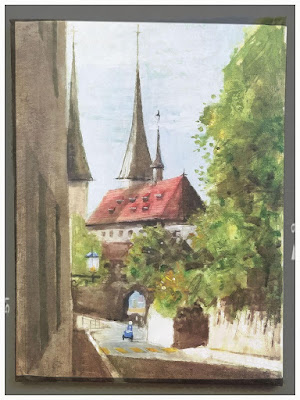 I went through a fairly elaborate process to select a view from the 500 or so shots I took that day in 2017. From a shortlist of 15 I assembled a collage and processed that to mute the colours, suppress the detail and enhance the pattern of light and shade.

Two of my favourites were set aside as being similar to my first painting ie views through archways in a courtyard setting. The two where stairs were the primary subject seemed a little too abstract for my current needs. 3 or 4 were not quite interesting enough as tonal compositions. 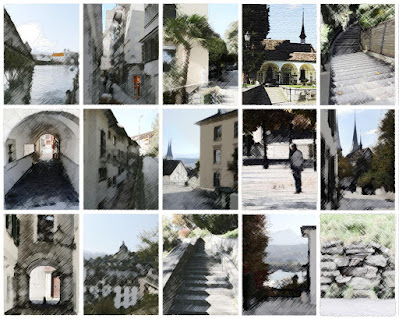 I asked myself what my motivations are. Partly it’s therapeutic, tipping the balance away from the digital realm slightly. But it also needs to integrate with my digital work. It should fit into my Way We Build framework. So the architecture should have some intrinsic value. Also I wanted some point of focus and human presence.

My selection has the dynamism of looking downhill, with a cyclist at the bottom about to turn right. There is an interesting framing with trees on the right and fairly bland buildings on the left. The church of St Leodegar with its twin spires provides the architectural and historical interest.

There are other elements that enrich the scene. A pedestrian crossing, a street lamp bracketed from the buildings on the left, a sparse metal Railing that directs the eye towards an archway, a back door to the monastic church. 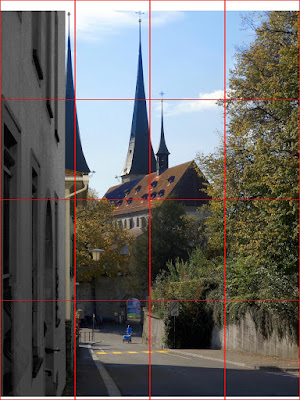 I used a 4x4 grid again, drawn in a, Revit drafting view, saved to jpg and loaded into my ipad. This facilitated a quick pencil sketch that captured the proportions well enough. Then straight into the broad brush blocking out. 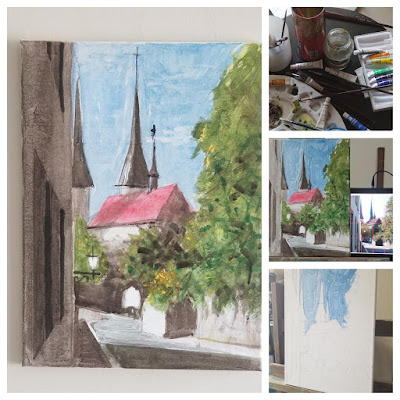 Lucerne is associated with the William Tell myth.  I had to look up the TV show I watched as a young boy, probably one of the first shows I can remember after we finally made the huge leap of buying a weird little TV.  Culture shock squared.  Dear reader: can you remember the transition from Radio to TV as a specific moment in your life?

Turns out this British production was filmed in Wales (Snowdonia) with a specially written theme song to the tune of Rossini’s overture. “Come away, come away with William Tell…what a day, what a day when the apple fell”  Turns out that the myth is shared by several European cultures, possibly originating in Denmark with the tale of Palna Toki who also shot an apple from his son’s head. 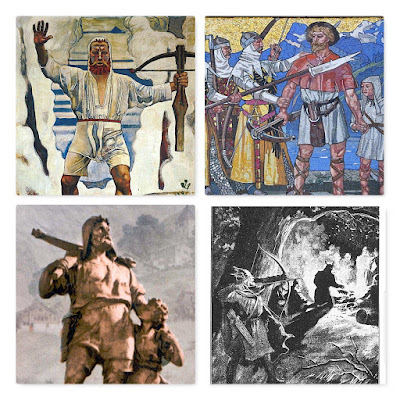 It’s interesting to reflect on the independent, democratic tradition of Switzerland, the struggle to break away from Habsburg rule, the decentralised governance and distancing from Europe.  Such rich histories to the various nation states of Europe.  Is the EU the modern equivalent of Habsburg Tyranny?  Can we continue to function as cohesive societies as the myths fade via TV soaps into Netflix specials and internet memes? Can our polarised political landscape learn from the religious divisions of the past?  Lucern is a majority Catholic city that formed a confederacy with neighbouring Calvinist cantons.  Do we need a common enemy and if so, who is our Landburgher Gessler? 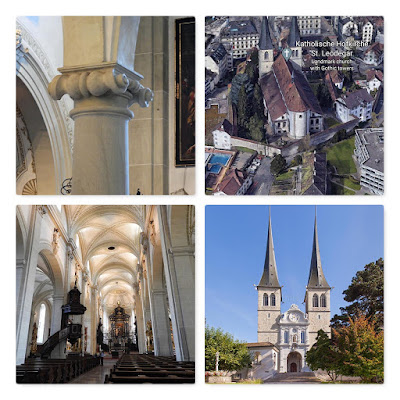 The church of St Leodegar began as a monastery.  Its Romanesque towers survived a fire in 1633 and now offer distinctive framing to a baroque nave which is less spatially adventurous than the Jesuit church lower down on the far bank of the river Reuss.  I harboured ambitions of doing a quick massing model of St L with Revit, but given my general exhaustion and the primary focus on creating a painting, that wasn’t going to happen in time for this post.

What I’m aiming for, I think, is a multi-faceted integration of Digital and Physical “models” or “twins” if you like.  Reflections on a place that I visited, a cultural context with its own history that can give me pause in my own journey.  There are infinite aspects of Lucerne, Switzerland, Europe, the Baroque etc that I could delve into.  My approach is to create quick sketches, to use the broad brush, to improvise and select intuitively where to focus my attention. 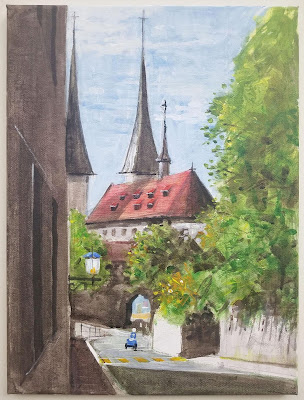 What does the process of painting bring to the table?

Certainly it brings back thoughts and feelings lodged deep in my subconscious memory.  This was me 55 years ago as a teenager obsessed with the act of painting.  Compared to a Revit model it integrates the biological inhabitants of a city into my thoughts in a more direct and fluid manner.  The trees and the cyclist are not just supporting props in the way that Enscape3d assets might be used within a BIM model. 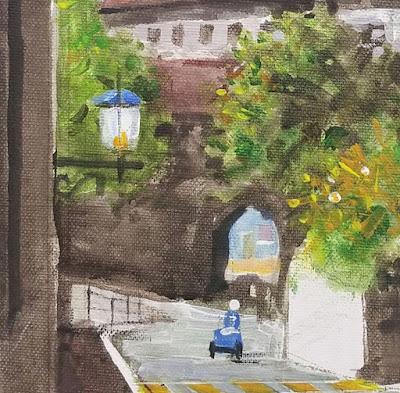 How did I do.  I’m pleased with the composition and the process was good.  My technique … not quite up to expectations yet, but it’s early days and some of the brushwork is getting close.  Keep trying 😊

As for the integrated approach, let’s see where this goes.  I would like to spend another weekend or so thinking about that day in Lucerne and weaving some stories as I pore over the pictures that I took on that brief random walk. 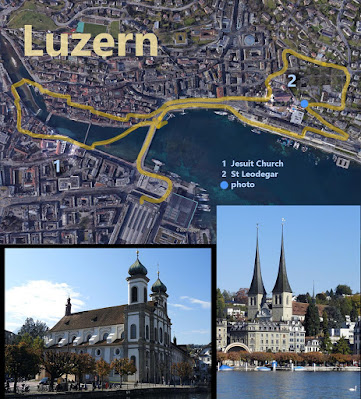