"In the cold light of day" ... or "view planes revisited"

Here is a more systematic account of my little experiment with window famlies and cut planes.  My contention is that the cut plane in the family controls the appearance of a door/window (if it is visible).  Meanwhile, the cut plane in the project determines whether or not it will be visible.  See below.  The top row of plans are controlled by a plan region with cut plane set to 900.  The lower row displays an identical set of families, but with the cut plane set at 1400. 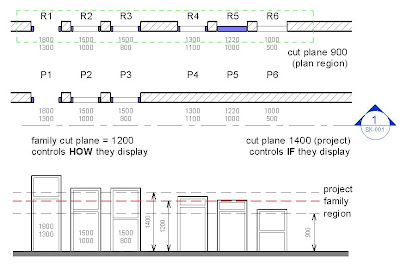 If these two cut planes within the project were controlling the appearance you would expect the following:

P1 would show the transom which is at 1300 (below the project cut plane)
R2 would not show the transom which is set at 1000 (above the region cut plane)
same applies to R4  (transom at 1100)
R5 is even worse.  The cut plane is passing through a solid member. This can only be explained as a function of the 1200 cut plane in the family.
R6 should be showing the jambs cut through in section (based on the plan region settings)
P4, P5 & P6 are not visible.  This is the one fact that is caused by the project cut plane at 1400.

I rest my case.

So what about other cuttable categories ?  I tried changing the category of the family to casework.  Basically the same result, doors also.  But Generic Models are different.  Here it seems the project cut planes take precedence & the cut plane in the family has not effect, likewise Columns, also Structural Framing.  This last part was not so rigorously tested, I just changed the family type, reloaded and took a quick look at the results.

For columns & framing there is an option: "Show family pre-cut in plan views" (Yes/No)  "Yes" gives you Window like behaviour, "No" means it will behave like a Generic Model

To summarise, this is the way it looks to me:

None of this is much of a big deal.  It only really came up because I was working with a door family where the cut plane had been changed to 2400, (ie the middle of the fanlight) which was messing up the appearance in plan.

On the other hand it could be useful to know the rules if you're trying to make something that's a bit wierd.  Say Windows with triangular geometry.

Ok so that's fairly weird ... it's also informative to see what happens.  The wall is controlled by the cut plane in the project, but window geometry uses the cut plane inside family editor.  So the "wedge-shaped blue thing" is always cut through at the same point no matter what the sill height.  But once the sill touches the cut plane, the wedge is no longer cut.  Except that if the cut opening is also sloping that rule changes for some reason.  Seems a bit odd. 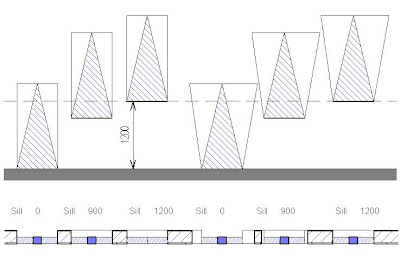 OK so this is not my usual type of post, so I'm not sure how long I'm going to stick with it, but I wish I know where to find a clear explanation of all these rules. 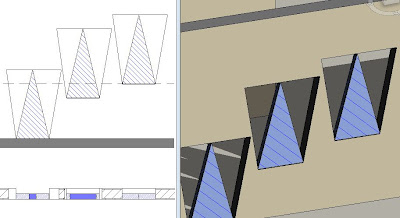 Just to finish off, here's the last example with the category changed to Generic Model.  Maybe any wierd stuff is best set as GM and save the windows category for the more conventional kind.