The title is taken out of context (as usual).  The cathedral of light was a display organised by Albert Speer for Adolf Hitler, searchlights forming vertical columns of immense height in an open field at Nuremberg.  But light had played a prominent role in the history of cathedrals for hundreds of years before those chilling events took place.  One of the major themes of Gothic architecture was the dissolving away of structural walls to allow dramatic effects of light. 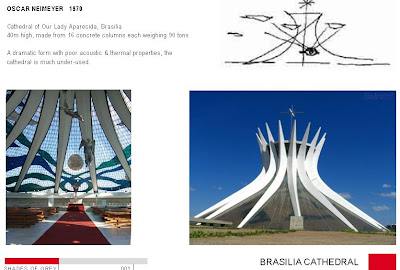 Oscar Neimeyer was an atheist (apparently) and an immense figure on the architectural scene when I was a schoolboy.  He participated in a project that aimed to launch Brazil into the modern world, a surge of belief and idealism backed by massive social inequality and authoritarian politics.  Much could be said about the naivety & the inherent contradictions, the contrast between the purism of the forms and the squalid living conditions of the workers who built them. 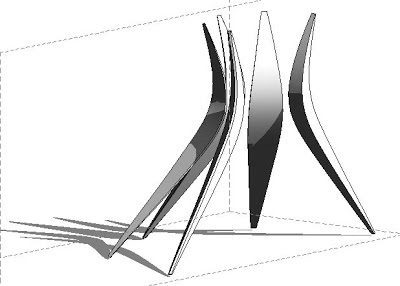 This post began as part of my Vasari Talk.  Towards the end I showed some images of architectural examples based on the spring onion wig hat.  One of them was the Cathedral of Our Lady Aparecida, Brasilia.  I tried to imagine that I was designing this building using Revit as a tool.  Let's pretend we haven't yet decided how high the building will be, how many columns there are in the circular array, what cross-section to use, etc.  Indeed I began the experiment without these facts to hand. 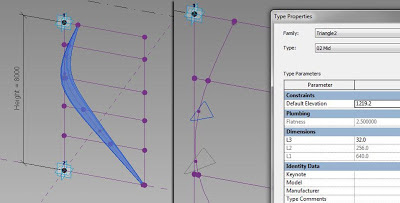 We build ourselves a scalable rectangular rig based on two adaptive points.  The height is a reporting parameter, the width is proportional to the height,  but also to an instance parameter called "spread"  As with most of my rectangular rigs, I divide it up with horizontal lines. and host points on these which will define a "spline by points".  Watch the Vasari Talk on youtube for a step-by-step demonstration of how to make scalable rigs.  Spring Onion 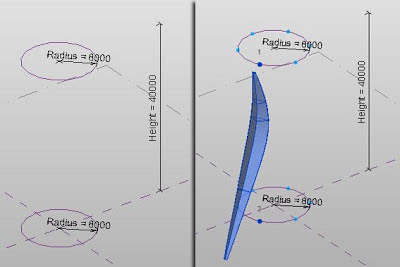 The rig is loaded into a mass family which has two circles placed on different levels.  A height parameter controls the distance between the levels.  Divide the circles (6 nodes appear on each) and attach the adaptive component to one point on each circle.  Select it and hit the repeat button.  From here we go on to link all the available parameters to instance parameters in the host family and load the result into a project. 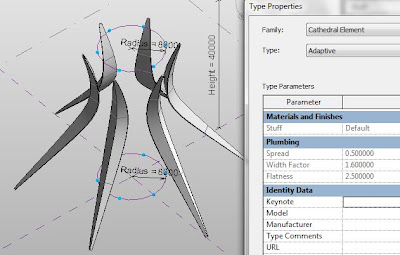 The cross-section of the columns is a "mass profile" family.  This is just an ordinary mass family with a closed loop of model lines drawn on the ground plane.  There are 3 parameters to link back to the height parameter in the adaptive component.  The proportion of width to depth is variable (controlled by a parameter called "flatness" in the host family) 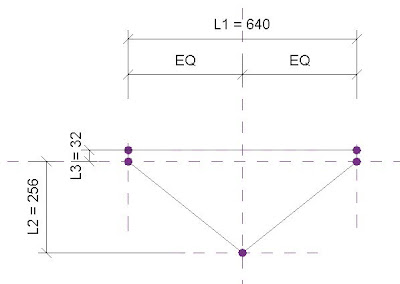 The result is a form that you can copy around and vary to your heart's content.  The variations shown here are extreme, but the real benefit of this method comes from the ease with which you can make those endless small adjustments that turn a promising idea into an elegantly proportioned design.

For example I spent some time in the adaptive family adjusting the shape of the spline.  Originally it was a continuous curve, but this didn't look right, & so I straightened out the legs & confined the curve to the "waist".  Revit has a reputation as a documentation tool that you can't use for "design".  My stock response is that no tool is good at design until you have reached a certain level of fluency.  Pencils are great for design, but we sometimes forget the hundred of hours spent honing our sketching skills.  Once you reach a certain level of fluency, the conceptual massing environment in Revit is a great design tool, combining power, precision & flexibility.  You have to pay your dues to get there of course, but what did you expect: something for nothing ?

That's as far as I've got.  Some day I will add glazing and a sunken floor accessed via a tunnel.  I wasn't suprised to learn that the building overheats and has terrible acoustics.  Apparently it has rarely been used, but there is talk of refurbishing it to overcome these practical defects.  I wonder how I would have designed it to avoid the shortcomings without destroying the purity of the form.