THE CONTINUING SAGA OF JOHN SOANE

Another weekend of following my nose wherever it leads.  I'm going to start with the Stock Office, which is where I ended up. 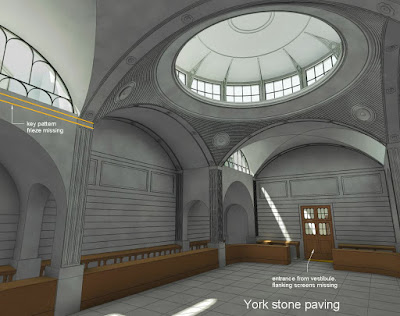 This is still a Generic Model family, inserted into my base model. My last couple of hours was spent studying the desks/counters and quickly knocking something up to represent them.  These and the doors help to bring the space to life a bit more.  Lots of work still needed though if you happen to have an hour or two to spare and can use Family Editor. 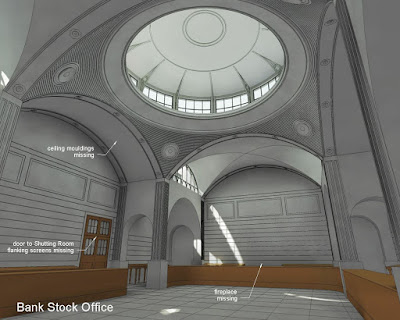 I really should have dropped a person or two in there.  I was thinking that our friends over at Archvision ought to give us RPCs of Wesley Benn and Jim Balding in their C18th costumes from the RPC Gala Dinner.  They would surely look quite at home in John Soane's world.  How about it Randall?

The desks themselves are quite interesting.  Looking at the snapshots I took and at the available drawings, the sloping-top item up against the wall (where clerks would presumably pore over ledgers taken from the cupboards below) is clearly built as a table with legs front and back.  You can only see the front leg in the photographs, but the plan layouts show matching back legs. 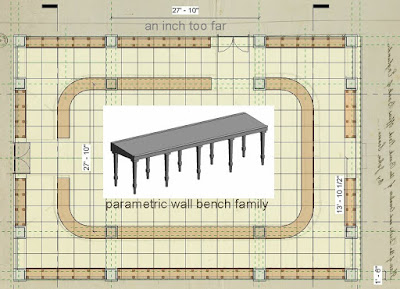 Perhaps we have go too used to the idea of using walls to help hold up our built-in fittings.  Maybe our technology for drilling and fixing to walls leads us towards a different approach.  Anyway, at the moment I've just built the top and the legs.  It's a parametric family.  Type in the length and the number of leg-pairs, Revit does the rest.  Doors will have to come along another weekend.  Or maybe someone else will volunteer to make some.

There is a rather splendid version of the Stock Office uploaded by Alberto Vilas Blanco flying the flag for Spain.  I have enjoyed exploring this, and was fascinated by the modelling of the foundation system.  These are basically vaulted cellars with inverted arches bracing the feet of the piers so that the whole thing resembles a cellular raft foundation.

I was inspired to knock up a quick version of this in one of my placeholder families.  Happens to be the Dividend office, which is the last in the chronological series of banking halls on a common theme.

A good portion of my weekend was spent updating and elaborating this, and the Colonial Office, also dating from Soane's late period.  I had acquired better reference material since I first modelled these, so there was a need to adjust some of the dimensions. 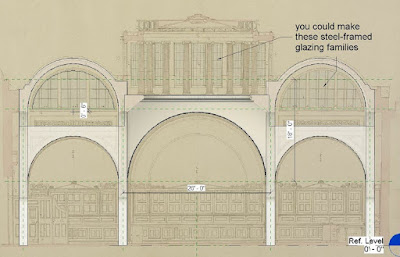 Both these banking halls use high barrel vaults either side of the main dome, which provides an interesting variation on the underlying theme.  One spin-off is that it allows him to make the columns flow seamlessly into the arches on all sides.  Previously, the lower sides required a change of angle, hence his hint of a capital to mark the top of the column and separate it from the arch.  Here though there is no capital, nothing at all to show where column ends and arch begins. 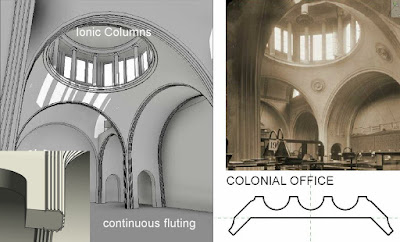 The continuity of the fluting in these last two spaces is almost Gothic in its effect, like the ribbed columns that soar up to become fan vaulting in medieval cathedrals.  Still lots to do here also: the counters with their curious light fittings, the decorative plaster work, elaboration of some of the families I have roughed out, like the Ionic Columns used to support the lantern. 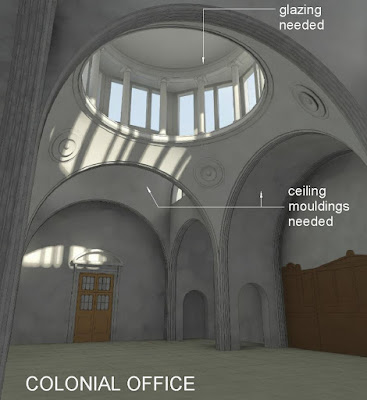 Imagine for a moment that you had spend 40 years of your life gradually massaging a rambling building complex into a coherent whole: repairing, rebuilding, extending.  Think of the pleasure you might get from revisiting a favourite theme repeatedly at ten year intervals, trying out new variations, mixing and matching.
It must have given him a lot of pleasure. 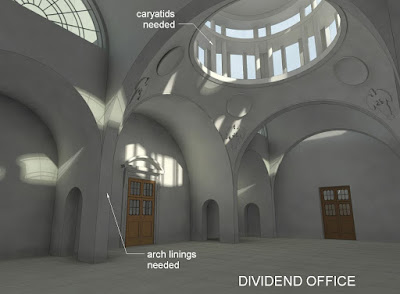 In my view, BIM is the ideal medium for this kind of historical research.  Yes we could model the elaborate classical detail more easily in a visualisation programme like Max for example, but BIM combines 3d modelling with the power of true orthographic projection, it reveals relationships, asks questions, demands an integrated, multi-faceted approach. 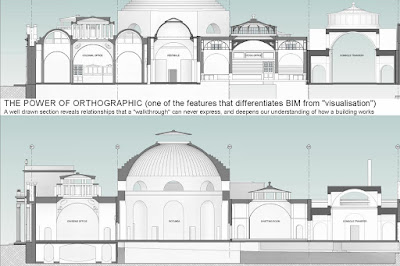 So I spent some time updating 3 of the 5 banking halls and along the way, apart from the foundations I also got to understand the roofscape a little better.  You can begin to see that the lower portions at the 4 corners which allow the semi-circular windows to let light come flooding in, actually link together like a maze of spaces threading across the building. 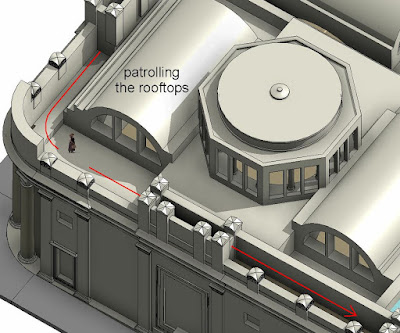 Also they are just about the right level to link up to the walkway that runs around behind the parapets of the screen wall.  In fact it seems to me that they help to connect these sections of walkway, especially at the corners where I previously thought that the circuit was interrupted.
Imagine being on night patrol, wandering through these canyons with a whale-oil lamp and a pike, peering down at times through those windows with their various shapes, or through the octagonal lanterns that Soane sometimes used above a porthole in the ceiling. 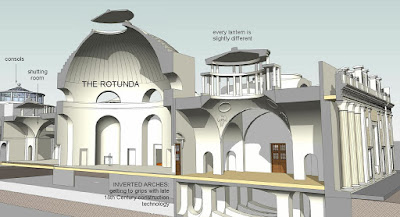 Another great thing about BIM is the way levels of information are added in a series of layers, gradually building up a fuller picture of how the building works.  At first it may seem to be slow going, but rest assured that the informative power of your model will grow exponentially.  And of course BIM is all about teamwork.  Which begins me right back to the beginning of the weekend when I loaded the 3 families contributed by Sheikh Uduman into my model, bringing the parapets to life.

They are very effective: simple and lightweight but with just enough detail to enrich the model.  Perhaps we will develop more complex versions eventually, plenty of scope for more people to participate, but for now these are very effective. 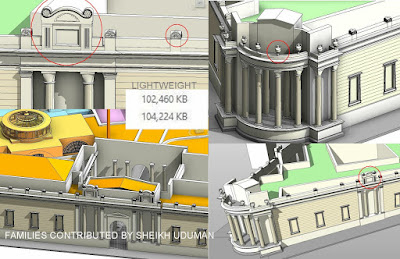 As I close with two exterior views that show how nicely the model is shaping up I just want to mention that the muted colours and lack of photorealism in my images are deliberate strategies.  Soane did use rich colours at times, but as a rule his architecture is measured and restrained.  Indeed he was often criticised by contemporaries for the austerity of his designs.  I want to capture something of that proud aloofness as I tell my tale "The Continuing Saga of John Soane". 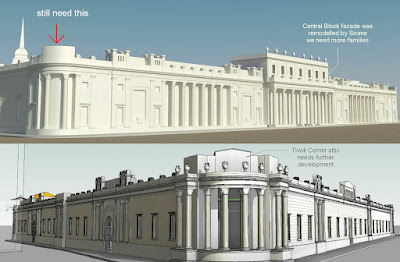