AROUND THE BEND WITH DYNAMO

I have referred to Project Soane as my "Pumpkin Substitute" for 2015, and it certainly has assumed the role of an obsessive, goal-driven project that consumes my weekends for the third quarter of the year, rewarding me in good measure with copious insights and experiences.

A week or so ago the former Pumpkin Master General, Mr Zach Kron tossed a few dynamo nodes my way in response to a tentative query.  He had been unrolling curved surfaces so as to more easily document them for fabrication.  I wanted to reverse that process so as to add decorative scrolls to a curved wall. 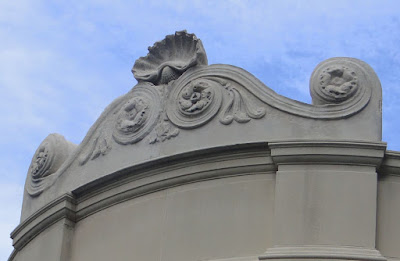 That weekend I discovered that the Dynamo I had on my laptop was a couple of versions out of date.  This tells you how lax I have been in following up on the excitement I felt when first I watched Matt Jezyk's demonstrations at RTC Atlanta more than 3 years ago.  I have neither TV nor internet at home so Dynamo had to wait another 7 days. 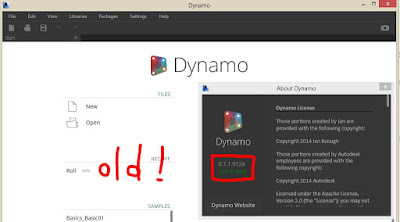 I spent around half an hour fumbling around in the dark, reading the labels on the nodes, tracing the wires and puzzling over error messages.  Was I just being dim ?  Perhaps, but along the way the whole Dynamo environment gradually became less scary.  My basic mistake was to place the flat surface and the curved surface side-by-side instead of thinking literally about the projection process. 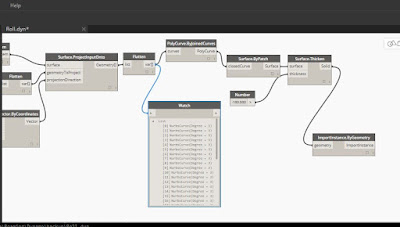 Having achieved a weird looking trial shape, I went on to explore the scrolls that I need for Soane's Bank.  This is a kind of tiara that crowns three of the four rounded corners on his screen wall.  It takes the form of a double scroll with a shell top centre and a few dangling garland type things.  I want to capture the essence of this fairly simply if I can and the starting point will be a simple extrusion wrapped around a curve. 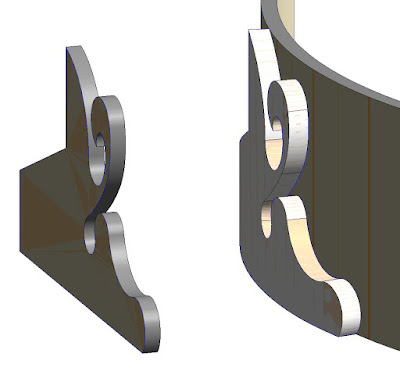 First of all I discovered that the nodes as supplied require a single closed loop.  Think "pads", or profiles.  You can make an extrusion (or floor, or profile-edited wall) with more than one loop, which is what I did at first.  Perhaps the nodes could be elaborated to allow for this, but that's way beyond my skill level just now, 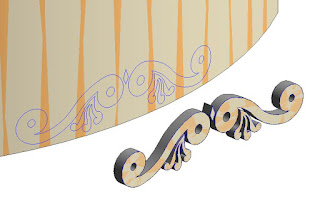 so I worked with what I had.  Looks a bit like buffalo horns. 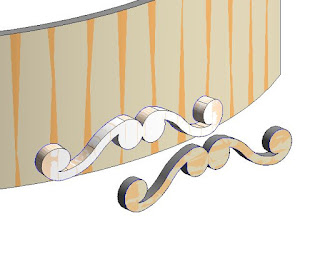 I added some dangly bits and I discovered that it's possible to use the resulting form with "Pick 3d Edges" to generate in-place sweeps. 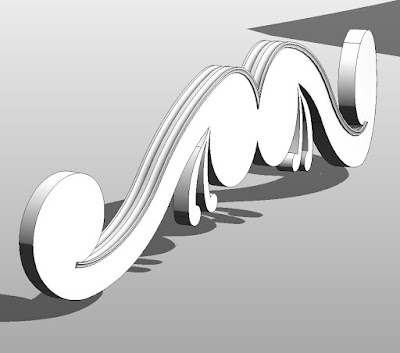 The geometry itself is some kind of CAD import, and you can change the material by going to the imports section of Object Styles and looking for the appropriate unpronouncable hexadecimal name.  But you need to the "instance" which is just named "0" and lies hidden in an expandable branch.  Exploding this geometry didn't work, at least in my case.  So no way to assign a material parameter (sad to say) 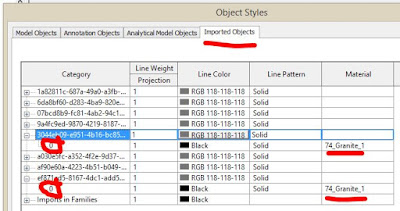 All the same this is a neat solution to what seemed to me a diabolically difficult modelling challenge.  I had managed to create something from a swept blend (basically a tapered scroll) cut by a curved slot.  It's clumsy, but the best I could manage at the time. 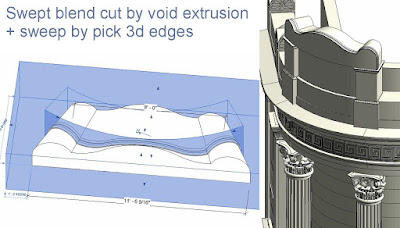 One of the nice things about the dynamo solution, once you've got it pumping out objects, you can just keep copying them out to the side, recording design development as a series of iterations (if you want you can even rename the hexadecimal gobbledygook to something intelligible) 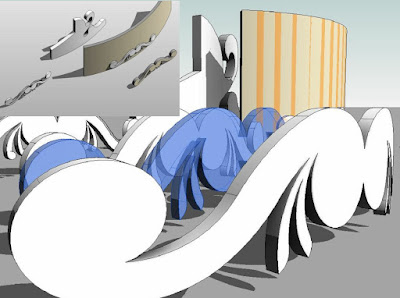 So I put together a thick outer bit with a thinner inner bit (nice) and got something vaguely reminiscent of Soane's curved parapet feature.  Not bad as a proof of concept. 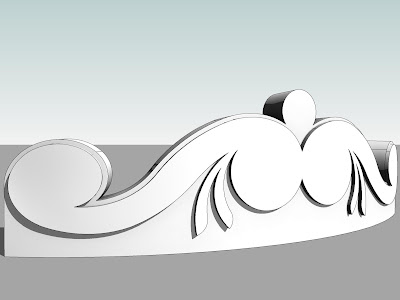 Good enough in fact to spend a little time tarting it up with some sweeps and revolves, applying a material and splicing together a render with a shaded view.  Now what was I saying about the fat lady again ?  Nothing like a quick Valkyrie to get the juices flowing. 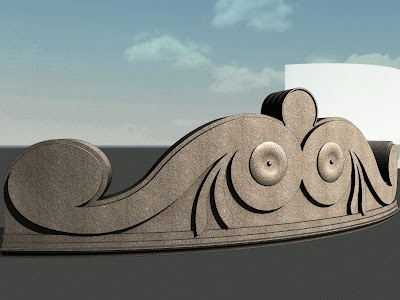 Email ThisBlogThis!Share to TwitterShare to FacebookShare to Pinterest
Labels: dynamo