I’m building on an idea from 2006 near the beginning of my Revit journey.  I managed to open the original file, but decided to start again from scratch … hardly surprising really.

Way back in the mid-1980s when I was writing textbooks for the ministry of Education in Zimbabwe, we use the construction of a simple rural house as a story line to connect the various exercises, theory lessons, skill training etc. that comprised the syllabus.

The illustrations were all hand drawn, and we never got past halfway.  20 years later I decided to use Revit to tell this story.  Another 15 years on I’m trying to follow through on that.

My first challenge is to generate a set of modular families to represent brickwork in the process of being built: erecting corners, stretching a line, running in, erecting more corners, placing frames, more running in, etc. 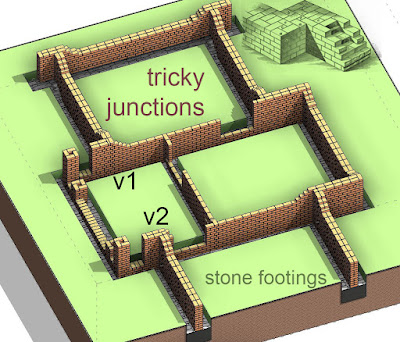 The building I am proposing to construct, “brick by brick” is based on a design that I came up with around 1990 for a 3 roomed worker’s house at a remote training centre in North East Zimbabwe.  The location was a camp for Mozambican refugees, and everything was done in a very simple way with hand tools.

The actual house was built with cement blocks, but I am going to use UK-metric size bricks.  Those are the sizes I worked with when I was a bricklayer in the 1970s.  Almost immediately some interesting challenges arose with a Tee junction sitting 1 ¾ bricks away from a stopped end.  These projections will be used to carry roof beams, providing a degree of overhang to shade the windows.  We didn’t want to use factory-built trusses because of transport costs. 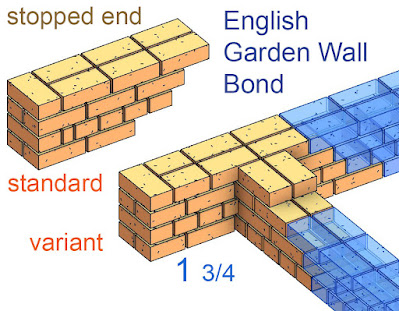 I had previously modelled this same house in a conventional Revit way, using the wall tool.  So I brought in a pdf generated from this file as a guide.  I’m using a “standard brick” family with the various cut sizes as “Types” (Half Bat, Queen Closer, ¾ etc.)  This is a “shared-nested” element within linear-array families that represent a header course, or a stretcher course.  These then nest into component families that represent four courses of “running in” with a parameter to control the length required.  The various corners and junctions are generally assembled brick by brick, but with visibility parameters to toggle between different conditions (stopped end, toothing, raking back) 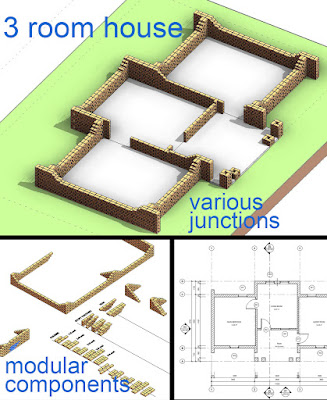 To be honest it’s still a bit of a mess at the moment.  With every new challenge I have to go back and rectify shortcomings in my modular elements, add new parameters, re-think the approach perhaps.  But we will get there, and I will have a system at the end which can be quite easily adapted to other “way we build” story-telling episodes.

I’m going to include a shot of the original file from 2006.  I actually had a level for every single brick course.  Looks pretty crazy now that you can see levels in 3d.  There were no nested families in this version.  Just some arrays, created directly in the project.  As you can see, it was a different house plan. 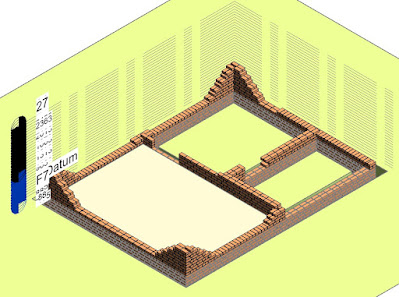 I’m almost ready to start adding some door frames now, and to show how they are plumbed up and propped in place while brickwork proceeds.  They will be pressed-metal frames which are pretty much universal in Zimbabwe.  The door panels will be hung much later of course.

Then I need to go back and show the timber profiles used for marking out the foundation trenches and the method for plumbing down from the lines to mark the position of the brick corners below ground level.  I did some work on this before, in 2013.  Note the early use of “Realistic” view in this image. 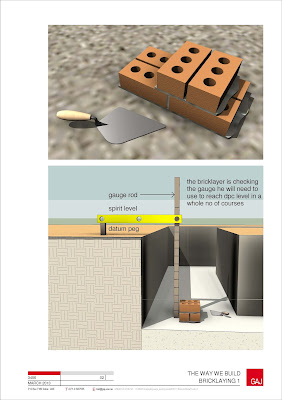 Below is a photo of one of the houses, taken during one of my site visits.  The basic layout is the same, but I am adjusting some of the details to suit my pedagogical goals.  The unfinished building on the right is a communal kitchen.  I’m not sure if these were actually used, or maybe people reverted to the traditional open fire approach.  There was no electricity in the area, but I think there was a plan to electrify the main training centre. Not the workers’ houses though.  They would have had a basic ring of piped water based on boreholes and storage tanks, and some flush toilets feeding into septic tanks.  Maybe there was a plan to install a small sewage pond system.  I don’t really remember. 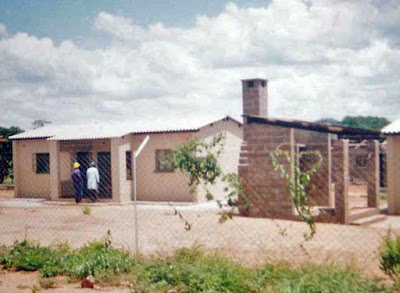 The final image is a sheet that I set up for a talk I gave some years ago to building professionals in Dubai.  Those were the days when most consultants didn’t know what BIM was.  I used that model to demonstrate the concept of generating all the information from a single source and having all the views and schedules update in real time when you made a simple change like deleting a door.

So this gives an idea of the house I am setting out to construct, “brick by brick” with the intention of using Phasing to show the construction sequence in a step-by-step fashion. 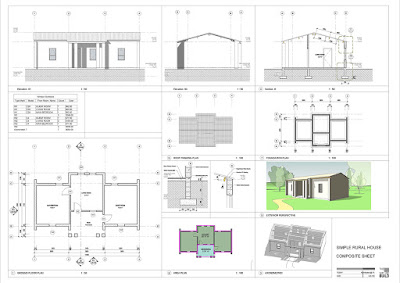