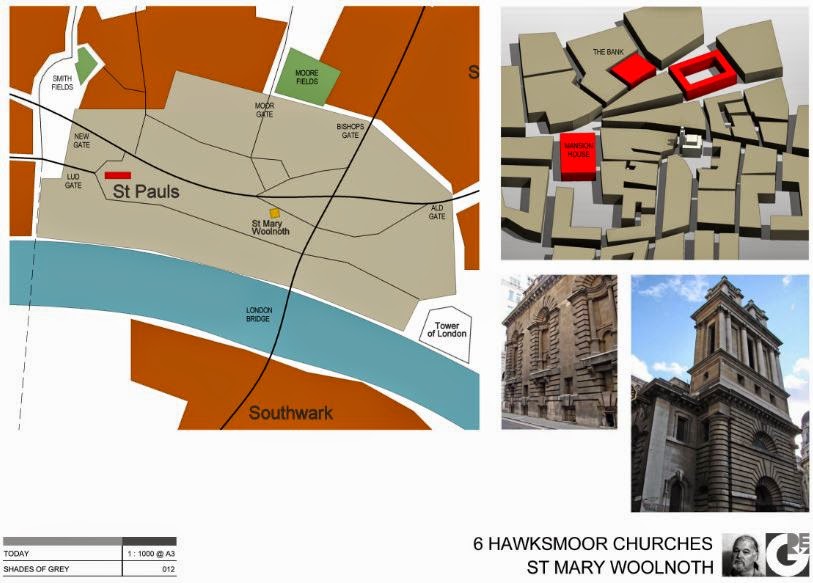 Church no 5.  Now we dive right into the heart of the city.  St Mary Woolnoth is close by the Royal Exchange an open cloister where business deals had been made since tudor times.  Like most of the city, it had been rebuilt 40 years previously following the great fire of London.  The previous church had also been patched up (by Wren) but  by 1711 was deemed unsafe and demolished.  Apparently the name does not derive from the wood trade, which by now was dominated by the London merchants.  All the same there was an open market close by, called The Wool Church Market, which would soon make way for the Mansion House, home of the Lord Mayor of London.  The closely packed streets and alleys behind the church were packed with coffee houses, all the rage now as places to meet and make deals. 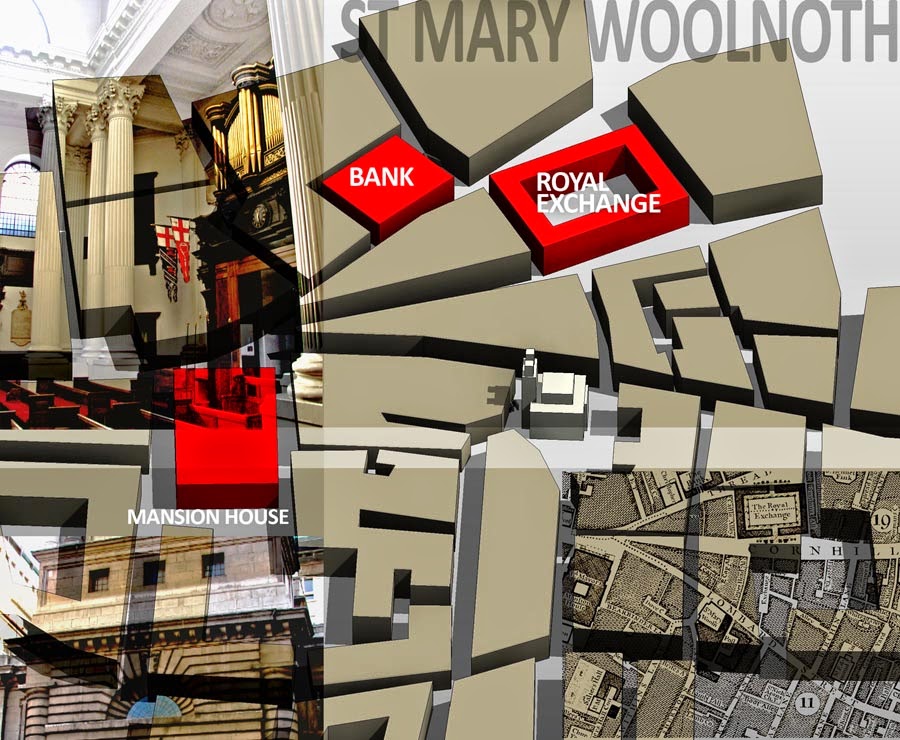 So this is a different kind of site, and Hawsksmoor designed a very compact church, a cubic volume with a rather unusual rectangular tower ending in two square turrents.  The church is twisted off axis, clockwise by about 30 degrees.  The circulation is very simple, as befits such a small church.  One entrance and two small spiral stairs buried in the splay of the front corners giving access to the galleries (sadly removed in the C19). 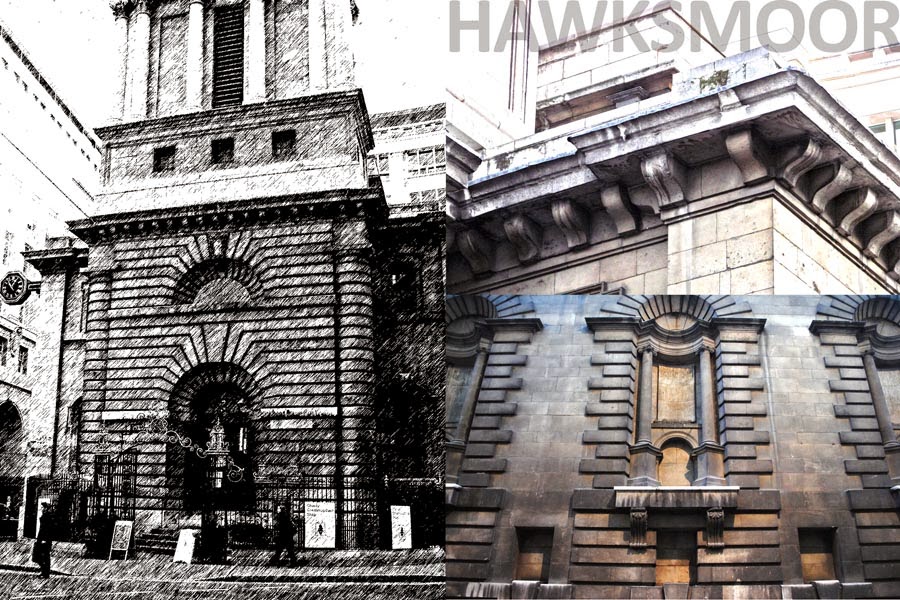 Finally we come to St George Bloomsbury.  The site is in the newly fashionable "West End" amongst streets of townhouses, developed on Land owned by aristocrats like the Duke of Devonshire.  At this stage they still maintained their own large mansions, but they would soon move further out and demolish their grand houses to make way for more streets and houses for the nouveau riche.  London was on its way up, rising on a tide of business deals made in the city, financial institutions such as the Bank of England, and joint stock companies like the East India Company (EIC) which had been importing ever increasing volumes of Calicos (printed cotton) from India over the previous century. 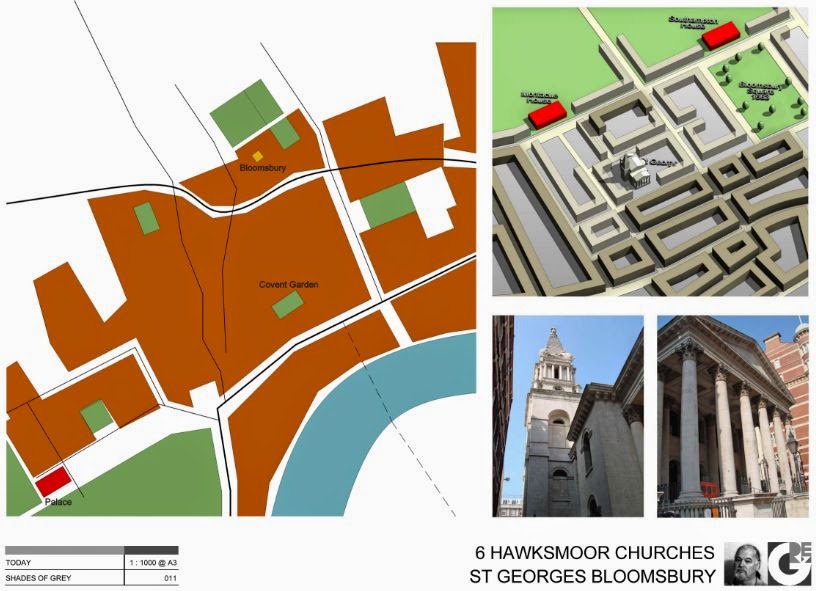 The wool merchants in the city, and silk weavers of Spitalfields were not amused.  Cheap, lightweight printed textiles threatened to undercut their markets.  They lobbied parliament and a series of Calico acts followed, around the time that Hawksmoor was building his churches.  The import of printed cloth was banned.  People imported plain cloth and printed it in England.  Then plain cloth was banned leading to the import of cotton thread in large quantities and stimulating the growth of a substantial cotton weaving industry. 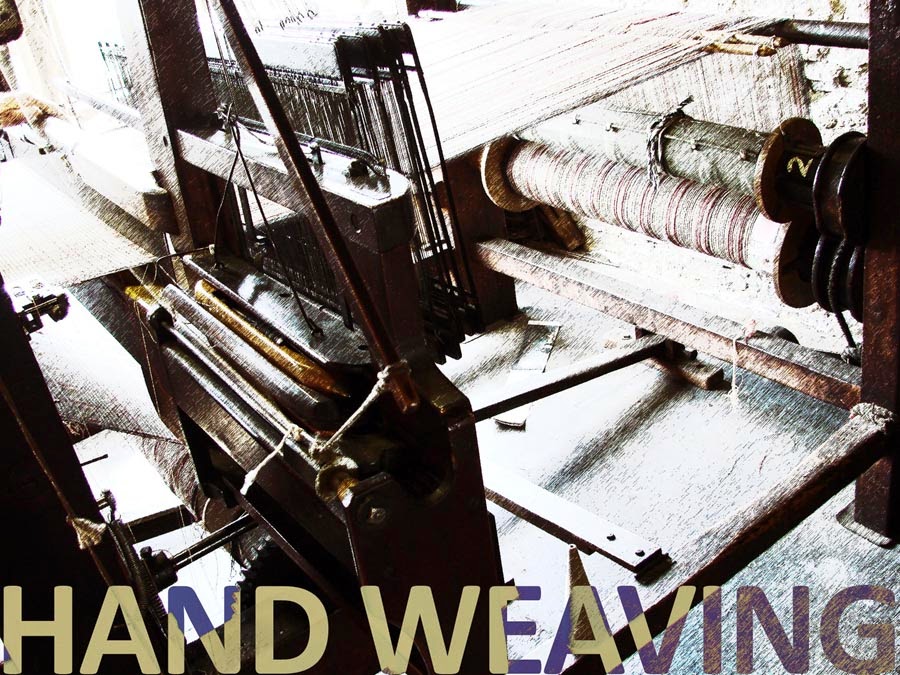 The lesson: trade restrictions have unintended consequences, in this case (ultimately) the Industrial Revolution.  First of all there was a very lucrative business spinning, weaving and printing raw cotton.  The weavers couldn't keep up.  Kay's flying shuttle fixed this around 1740.  Now the spinners were under pressure. 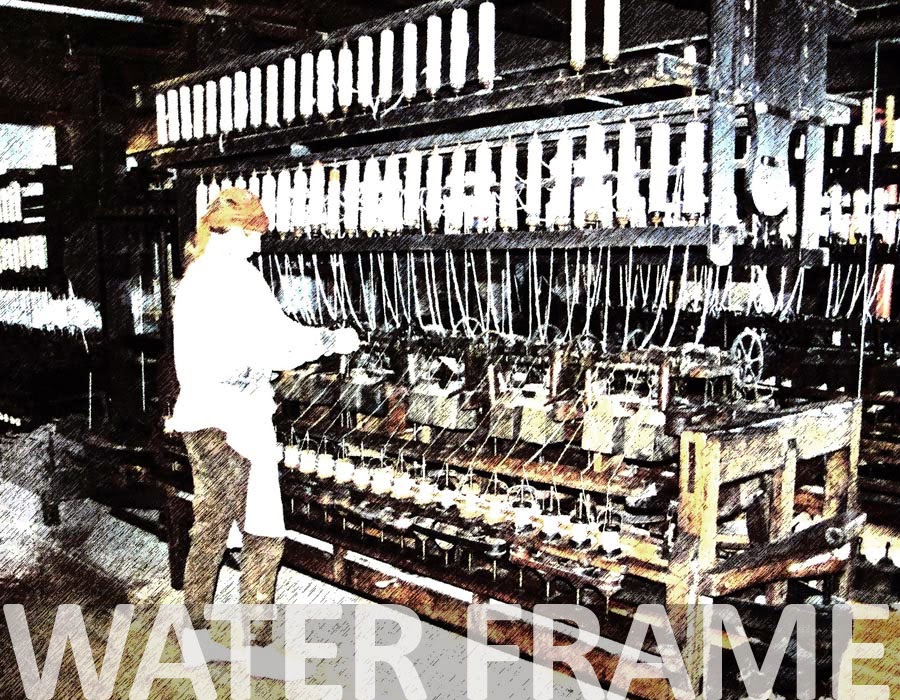 Fortunately England had been fertile soil for artisans and entrepreneurs for several generations (witness the silk weavers).  Many minds set to work and ultimately Mr Arkwright, a former wig salesman from Lancashire, came up with his Water Frame in the 1760s and pioneered the idea of a Cotton Mill (His first mill was in Cromford, Derbyshire).  It caught on big and initiated the chain reaction we now call the Industrial Revolution.  All because people living and working in areas where churches 4 & 5 were going up, lobbied against the cotton trade.  Well, partly because. 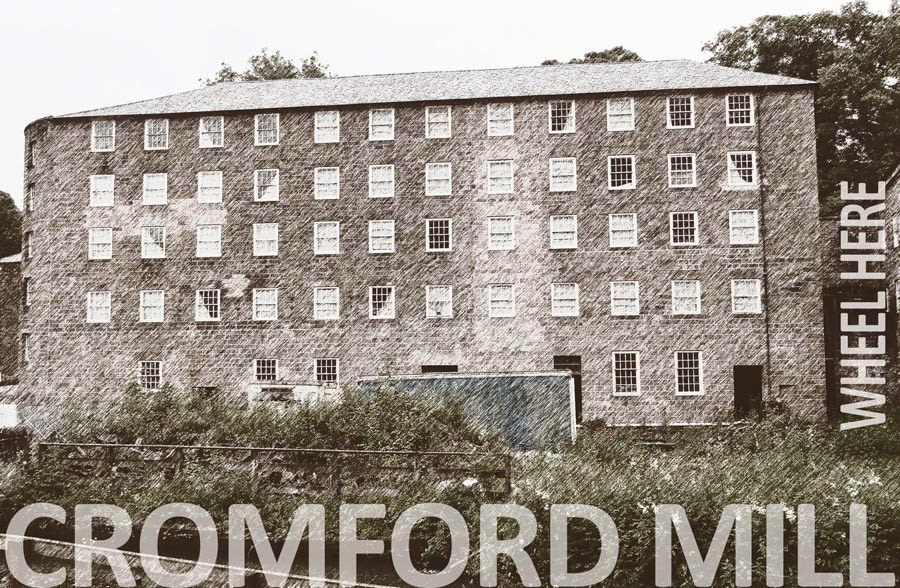 Back to church 6.  Here we have a challenging site.  Twisted about 30 degrees counter-clockwise and hemmed in tightly to east and west.  Hawksmoor's solution is deceptively simple.  Tower to the west, apse to the East, grand portico converts the south transept into an imposing entrance with no less than 5 sets of double doors. 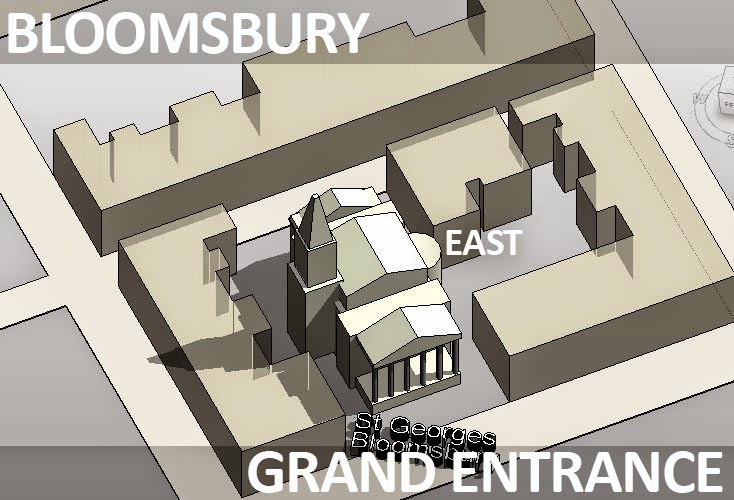 Vertical circulation is by open, geometric wooden stairs, spiralling up to the balconies.  These were removed, but have been restored.  In real estate, location is everything.  St George Bloomsbury has been lavishly restored, where St George in the East makes do with a small concrete framed, modern enclosure within its bombed-out shell.

Hawksmoor's solution to an awkward site (whose purchase he had negotiated) was clever, but apparently did not impress the fashionable parishioners who took down the north gallery in 1781 and moved the altar to the north wall (north-west) this gave them a conventional layout, more like Spitalfields, with a tower to one side and an apsaidal transept to the other. Now that the church is as much an architectural museum as church, the original scheme has been restored, along with the writhing mythical beasts clinging to the corners of the steeple.

Six fascinating churches, giving us a glimpse into six different locations in London, with a shared history dating back to 1700 and beyond.  England was on the edge of a transformation that would shake the world, but looking back at the two images of the technology involved (hand weaving and the water frame) it struck me how similar they are in general construction.  It may have set off the industrial revolution, but the water frame is basically bits of hardwood joined together with mortice and tenon joints plus a few smaller metallic moving parts.

It's not that it's a huge conceptual breakthrough.  Arkwright saw a challenge and used existing knowledge to turn it into an opportunity.  At that moment the cherries on the slot machine happened to line up.  The market for cotton cloth had already been primed, the Calico Acts had built up pressure in the system, London had financial systems, a thriving port and a growing middle class, James Watt and Matthew Boulton had semi-effective steam engines largely confined to mining but as it turned out capable of meeting the challenge when the rivers and streams of Derbyshire maxed out.

And so the explosion of fossil fuel usage began and the London that Hawksmoor knew was unrecongnisable within a hundred years.  Soane was busy expanding the Bank of England, deep water docks were being constructed on the Isle of Dogs, at Shadwell and Wapping.  The primary engine of this growth was Cottonopolis (otherwise known as Manchester)  In 1800 Liverpool was the busiest port in the world, handling more than a third of global trade, primarily raw cotton heading into Manchester, and finished cloth coming out.  The canal system couldn't handle it.  Neither rail tracks, nor steam engines were new technologies but the race to put them together in a cost-effective manner now had a motivation.
Posted by Andy Milburn at 7:57 AM