Konigsplatz in Munich is a set piece of Neoclassical urban design by Leo von Klenze, court architect to the king of Bavaria.  I stopped off there, pretty much straight from the airport.  I thought it would be interesting to compare this rather formal, academic style with Soane's more idiosyncratic interpretation of the classical orders.  My first shot illustrates the endless variation that is possible within the classical idiom.  Notice the frieze running around the neck of the column, somewhat unusual for an Ionic capital. 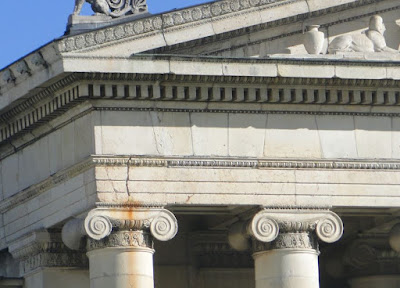 This is really a continuation of my previous post where I shared my "tips and tricks" from Washington.  The next one is from my second session. This is me on one of my hobby-horses, pushing the idea that we shouldn't restrict BIM to our day jobs.  I like to think of the "BIM pencil" as an all-purpose thinking tool that can be used in any context where buildings are involved.  My current focus is historical research, but I've long thought that it would be interesting to use BIM tools to develop a reference work like Neufert, or AJ Metric Handbook.  Could be in book format, could be a website, could be really good, what do you think? 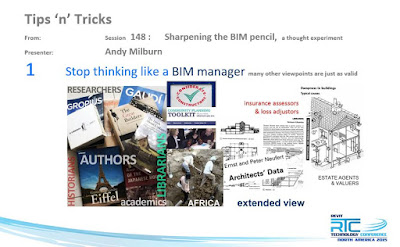 Back to von Klenze, and some running ornament. Not sure what this is called, but it's a flattened out version of something that Soane also used.  The flower motif that pops up between the "tongues" must be honeysuckle, also known as woodbine.  That also features quite a bit in the Bank of England.  The abstraction of this Bavarian version reminds me of Soane in his "inventive simplification" mood, which seems to have come and gone depending on the budget available and what the critics had been saying about him recently. 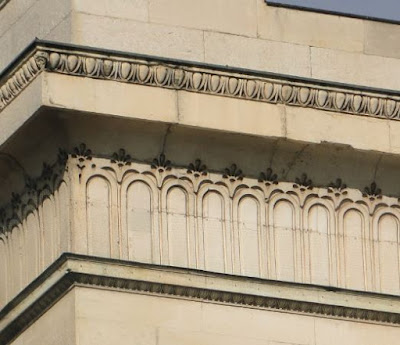 How about a bit of Corinthian?  This one is for Paul Aubin, currently playing with drones in Tuscanny.  It's "light and curly" feel is similar to the one Paul created as a virtuoso exercise in "Point World" geometry.  This also features honeysuckle, a rather unusual choice for the flower motif, and the whole thing has a completely different feel when compared to Soane's version at the bank, which I modelled in a very clunky but surprisingly effective way about a year ago. 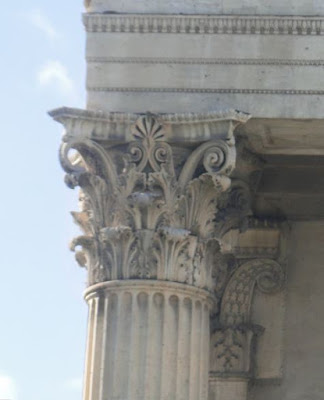 Next tip, and this one is from the lab I held in Porto last week.  It's also a fairly conventional tip, and a rework of one I gave in a post I did earlier this year when I was starting off on my "modular doors" idea. 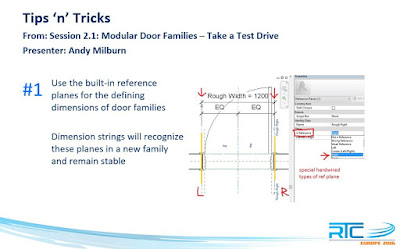 Now for a building by Paul Troost, who was one of Hitler's favoured architects.  Like Albert Speer he used a kind of "stripped classicism" which could be interpreted as taking the simpification that Soane & von Klenze explored and taking it much further so that you get a kind of hybrid between Modernism and Classicism.  There were lots of people who did this in the first half of the twentieth century, but as a style it has become rather tainted by it's association with Hitler (and Mussolini)  This building operated as a Music School for many years, but appears to be empty at the moment. 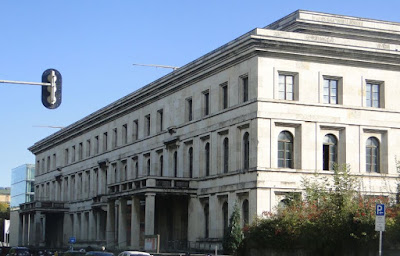 Another doors tip next.  Seems very obvious, but it's something I missed when I first started making doors, and talking to others at the conference in Porto I found that I wasn't the only on who found the default orientation of doors rather illogical.  But however logical it may seem to "correct" the default template, sooner or later it will get you into trouble when you swap out one of your doors with one made "the default way". 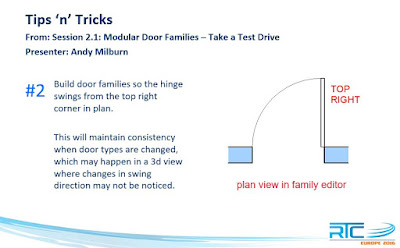 And back to Konigsplatz, this time a panorama of the whole thing, two buildings and a gateway.  Soane would have been really jealous of this kind of commission.  He longed to have a noble patron who would give him the task of devising a monumental civic work to ennoble the city.  For my money though, he was much better off hammering away at the thorny problems he was given to solve by the governors of the Bank of England.  Commercial clients represented the future of architectural patronage in an industrialising world and ultimately Soane helped to shape the modern profession based on his experience working with the governors of the Bank.

Now for a tip from my Project Soane session in Porto.  This addresses the thorny question of LOD and what represents good practice in family editor.  In my view there are very few hard and fast rules.  You have to asses the situation you are in and model accordingly.  Sometimes a really simple and elegant solution may fit the bill.  At other times you might have to compromise and accept something slightly "hacky" that captures the design intent by fooling the eye into seeing more detail than is actually there. 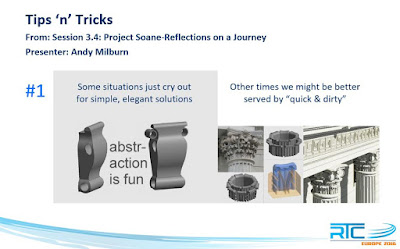 Many of the classical buildings in Munich use a type of stone that seems to have air bubbles in it, sort of a bit like travertine but without the marble quality.  I would love to know if this stone has a particular name and where it comes from.  I'm assuming it is local to the Munich area, but that's just a guess.  Was it used because architects liked the texture? or was it just because it was available? 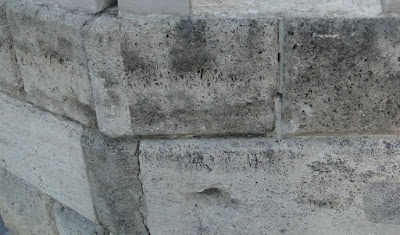 On our day trip to Nuremberg we came across the house where Albrecht Durer lived.  We didn't have time to go inside.  Durer's father was a goldsmith who moved from Hungary to Nuremburg in early manhood, but the son showed such precocious talent in drawing as a teenager that he was apprenticed to an artist/printmaker.  I was first introduced to his work by my father, who taught me that one of the best ways to understand how something works is to draw it.  The act of drawing is a powerful tool for understanding how something works, what really makes it tick.  I like to think of BIM tools like Revit as "pencils with super powers".  I construct virtual models in order to gain a deeper understanding of a particular building, architect, style or technology.  In that sense I see my work as a continuation of the renaissance tradition established by master draughtsmen such as Durer 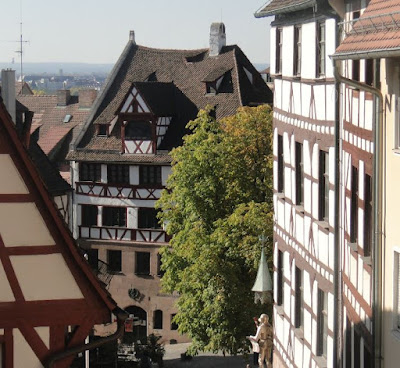 My final "triptix" follows on from this.  Masterful technique is essential to Durer's art, but it is not an end in itself.  Far too often we measure our worth by our technical skill, showing off and calling ourselves "guru" or "expert elite".  That's all well and good, but ultimately you either have something worthwhile to say or you don't and no amount of clever trickery will substitute for insight into the human condition, emotional impact, wisdom and compassion.  I would rather touch someone's heart than blow them away with my virtuosity.  Shakespeare was a master of language, but what really makes his plays immortal is his ability to make us see ourselves afresh, to identify with his characters and to be deeply moved  by the tragicomic poetry of life itself. 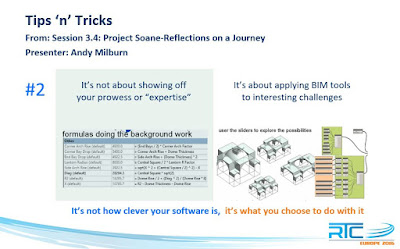 Love and lust are common themes in Shakespeare, but less obviously so in architecture, unless perhaps you count the voluptuous curves of a baroque church or a Gaudi roofscape.  I am not a great fan of phallic symbols, but if you are going to stray in that direction, do it with style and proportion, as in the image below: a stone buttress at the corner of Durer's house.  Debates about architectural style can often take on a moralistic tone.  Copying the modernism of 100 years ago is somehow more "honest" than taking inspiration from Soane's classicism of 200 years ago.  To me the issue is not so much about which precedents you choose to take as your starting point, but how well you handle the universals: proportion, rhythm, texture, light and shade ... and of course your ability to find a form that is appropriate to the project (its function and its setting) 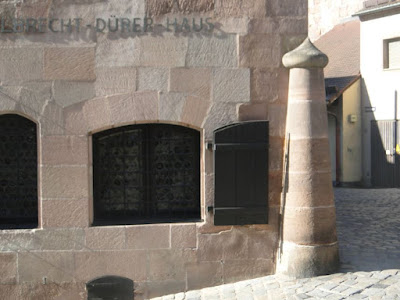 And so we come back to Zepellin Field.  My final image shows one of the terraces that surround and define the space where thousands paid hommage to the Fuhrer who led the German people on a disastrous escapade, not long before I was born.  Albert Speer found a simple and effective solution: using precast planks and uprights to stabilise rammed earth steps.  Current "renovations" aim to reset these simple precast elements, plant a slow-growing species of grass, and mow them periodically.  It will cost money to stop them reverting to the jungle that you see as a diagonal green strip in the image below.  Is a "stabilised ruin" the appropriate form in which to preserve this shocking piece of human history.  Personally I don't think the city of Nuremberg carries any special burden of culpability.  There go I ... but for the grace of circumstance, the accident of birth.  I was impressed by the careful and considered way that they are going about the task of curating the National Socialist relics that they have interited.  If only we could all treat our histories with the same lack of bias, hubris, sentimentality. 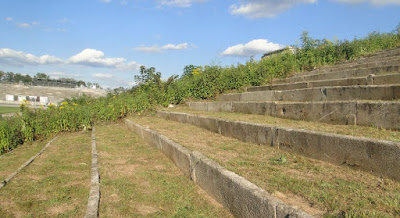