I am in Porto, having spent a fascinating weekend in Bavaria with my old, young friend Bernhard and his gorgeous family.  Along the way I was lucky enough to get a special tour (available once a year) of the Zeppelin Fields structures which a certain Mr Hitler used for spectacular propaganda events some 80 years ago.  I actually did a simple massing model of this as part of my research into colossal scale in the build up to my final pumpkin project in 2014 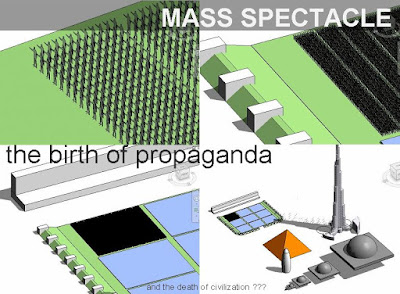 The tour gave some fascinating insights into how it was actually built, as well as a peek into the intriguing dilemma of how to set about "restoring" or at least maintaining a monument with such a terrifying history.  I won't go into that now, but it would be very interesting to do a bit more modelling and to talk about the moral issues involved in historic/heritage projects.  Many of the monuments we revere and hold up as symbols of national pride were built for oppressive regimes using something close to slave labour, but we tend to forget that if it was more than 1000 years ago.
Here's a shot of one of the areas that is very rarely accessible to the public.  This is the back door lobby where Adolf was supposed to gather his before mounting the podium, but apparently it was never really used because the fuhrer preferred to drive up in front of his audience and be seen to walk up the steps. 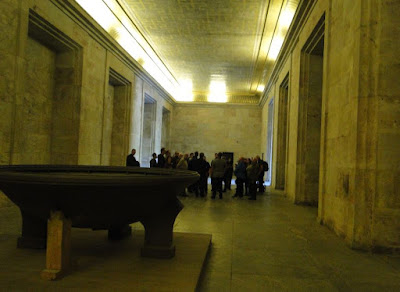 Returning briefly to my Desert Pumpkin work of 2014, here is an image that references the Cathedral of Light spectacle that Albert Speer devised to instill shock and awe in the assembled party faithful.  Searchlights defining space on a monumental scale.  I did this by processing images derived from Revit in Photoshop.  Would it be possible to mimic this kind of spectacular lighting directly in the rendering engine I wonder?  Another little experiment to while away a future weekend perhaps. 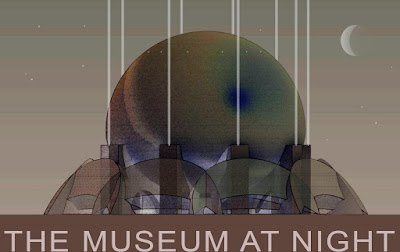 My title is a confused reference to the "Tips & Tricks" sheets that we have to prepare as part of our speaker submissions for RTC.  I tend to rebel against this aspect of the event.  It's not really my thing.  My "classes" tend to be less about teaching specific skills and more an opportunity for my to ramble on about my current obsessions.  Some attendees love it, others find my sessions irrelevant to the serious business of furthering their BIM careers.  It takes all sorts, or at least that's my excuse.
But I stumbled across my slides from the Washington event, and I thought it might be nice to put them in a blog post in the build up to RTC PORTO. 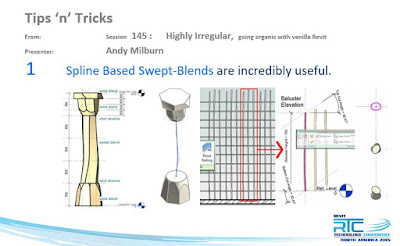 This one is actually quite conventional.  A genuine tip almost, and I should credit Marcello for setting my mind thinking along these lines by highlighting the ability of splines to do "scaling" work during one of his sessions that I attended.  Was that in Auckland?  How time flies.
The next one is more typical of me.  It's a tip I guess, but veering off in the direction of philosophical  guidance as opposed to technical hints. 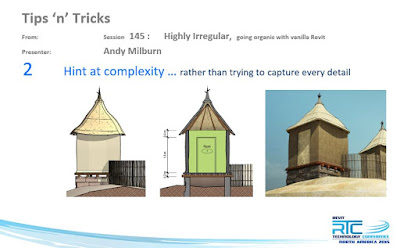 It's time to head off for breakfast now, so I'll pause here and press the "publish" button.  If you are in Porto, please look out for me and say hello.  The most exciting part of the event as far as I am concerned is meeting friends old and new, sharing worldviews and such like.
﻿
Posted by Andy Milburn at 11:47 AM